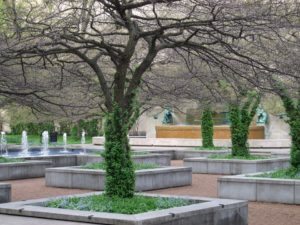 A serious renovation has just begun at Humboldt Park. Piet Oudolf – who was behind the very successful upgrade of Millennium Park’s Lurie Garden – was chosen by the Chicago Park District, the Chicago Park Foundation and the Garden Conservancy to lead the Jens Jensen Formal Garden restoration project.  This will involve an overhaul of the decaying infrastructure and a re-invigoration of the design features, paralleling Jensen’s infamous Prairie style. Part of what Oudolf will incorporate is a “durable” design, containing Chicago’s seasons. The Hitchcock Design Group has been commissioned as design coordinator, so that the end result will be the creation of a “community of plants that work well together and look beautiful throughout the seasons.”

For those who want to enjoy the fun parts of Chicago’s parks, the summer is the perfect time to start.  Earlier this month saw the start of Night Out in the Parks, marking Ellis Park’s fifth summer season of performances and interactive shows.  Featuring around 1,200 events, there will be something for each of Chicago’s 77 community areas.  And within the bounds of community spirit, 125 local artists and art organizations will be participating in these shows, most of which are free.

Meanwhile, to mark its 90th birthday, representatives from the Chicago Park District were at Grant Park turning on the Buckingham Fountain.  Participating in the celebratory event were both the Brookfield Zoo and the Shedd Aquarium.  In addition, those who want to memorialize the 90th birthday forever, can purchase a 1,000 pound chunk of marble for a mere $22,000….plus $299 shipping! Get in touch with Stuart Grannen of Architectural Artifacts for more details.