Several real estate sources confirm that a Chicago-based company called Industrious has contracted to lease a space in Nashville, Tennessee considered to be the newest and most expensive office space in that southern city.

Industrious plans on transforming the space into suites available for lease to a variety of companies from start-ups to national high-tech firms.

The 18,000 square foot space in Gulch Crossing is located in Nashville’s first new office building built within the past six years. The time gap since the last building has created a market for high-end, record-breaking prices; rent for this place ringing up at a juicy $37 and more per square foot.

Gulch Crossing has already attained 86 percent occupied with the addition of Industrious. Already in the building in Deloitte, who rented there just ahead of Industrious.

It is expected that Gulch Crossing will house between 600-800 workers;  giving the area a strong business feel during the day, standing out as Nashville’s most visible example of its newly born urban renewal. The building also houses 2,000 apartments and condos, upscale retailers and restaurants.

A McDonald’s is being considered to fill the space left empty by the long vacant Myoda Computer Center in Hoffman Estates outside Chicago. Myoda, located at 1070 North Roselle Road was taken over by a bank five years ago when the mortgage on the property was foreclosed.

Hoffman Estates is planning other improvements to their village, including putting in a traffic light this autumn at the entrance to the shopping center on Roselle Road.

If the plan for the McDonald’s is given a green light, then Hoffman Estates will have two of the newest McDonald’s in the area, instead of one of the oldest ones. That’s because the old McDonald’s is coming down as soon as a new, already approved, McDonald’s at Barrington Square Town Center opens up.

The Myoda building is a two-story structure that housed a computer store, but also had space for other tenants. The land is now owned by the BBCN Bank, which is planning to sell the property to a broker, who will then contract a lease for a new 4,338-square-foot McDonald’s complete with dual drive-through lanes.

If approved work on the new McDonald’s most likely won’t begin until the beginning of the next construction season, said Peter Gugliotta, Director of Planning, Building & Code Enforcement for Hoffman Estates. Once begun it should take between four to six months for the fast food restaurant to be completed. 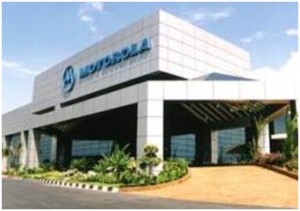 After 50 years in Schaumburg, Motorola Solutions Inc will be moving its global headquarters to Chicago. Schaumburg, which is about a 40 minute drive outside of Chicago, has been an example of how a company can create a sprawling corporate campus in the ‘burbs.

Along with its headquarter operations the giant maker of communications equipment for government and first-responders will be taking about 800 jobs to Chicago.
There will remain behind in Schaumburg a cadre of mostly software and hardware engineers numbering about 1,600. They will be grouped into two buildings, the twelve-story corporate tower, and the 2-floor IT building.

The entire campus, all 277 acres, will be sold and redeveloped. Then Motorola will lease back the two buildings back from the new owners, said spokeswoman Tama McWhinney.

Wine, beer, sangria, and a variety of frozen mixed drinks will be introduced for the first time at a US Taco Bell fast food restaurant starting on September 22 in Chicago. This location will also be the first to introduce tapas-style appetizers, have a mural painted by a local artist, and display an open kitchen.

“You will literally be able to see the food,” said Meredith Sandland, Taco Bell’s chief development officer. “(Customers will be) able to see all the beautiful ingredients,” she added.

The opening of this branch was first announced at the beginning of the summer, but without details such as opening date or exact location. Another Taco Bell with a similar theme is planned to open in San Francisco later in September. Taco Bell says that the basic menu and food preparation at the new locations will be the same as at the more traditional stores under the brand, aside from the innovations named above.

The new Taco Bell will open in the Wicker Park neighborhood of Chicago. They will be charging $4 ofr wine and beer, and $4.50 for sangria. The frozen drinks, called “Twisted Freezes” will contain rum, tequila, or vodka. These mixed drinks will be priced between $6.19 and $7.19.

Near the end of October Uniqlo, a Japanese retail chain, will be opening its flagship store in Chicago. The store will be Uniqlo’s second largest, with 60,000 square feet of floor space located at 830 North Michigan Avenue on Chicago’s Magnificent Mile. Uniqlo’s largest store is on Fifth Avenue in New York City.

Uniqlo deals in casual clothing such as jeans, scarves and sweaters. They also sell sportswear for men, women and children.

“Chicago is a global city that’s home to some of the finest cultural and sports institutions in the world, and we are thrilled to join the city’s rich landscape,” said Larry Meyer, CEO of Uniqlo USA.

It is expected that the new outlet will create 400 new jobs. Uniqlo is a global company with over 1,600 stores and 40 in the United States. The Chicago branch will be the first in the Midwest.

In widely seen photos first published on the popular social media web site Facebook, a Chicago policeman is shown helping a homeless man at a Chipotle in Lakeview.

The photos show Sergeant B. Hagarty buying lunch for a homeless man who had been digging through the garbage outside the restaurant. The officer noticed the man, tapped on the window, and beckoned for the man to come over. He then asked the homeless man if he was hungry. When the man said yes, Sgt. Hagarty invited him to come inside.

The kind policeman then purchased a meal for the man, shook hands with him, and then left.

The Chicago Police Department put the picture up on its Facebook page. In a short while the page received more than 16,000 “likes” and was shared more than 6,000 times.

The CPD offered praise to Hagarty, explaining that his behavior should be a role model for others. Hagarty is planning on retiring from the CPD at the end of this year, after 35 years of service.